Some say that chilling your wort is not difficult at all, and that is true if you have enough ice cold cooling water and are able to produce high flow rates. There are a lot of brewers that are struggling to cool their wort to the right level in a short amount of time. Water became expensive in some regions and often ground water is to warm in spring, summer and fall to use effectively. So if you live in either (or both) kind of region(s), like I do you need a proper wort chiller that would work all year round.

So, what is the best wort chiller to buy? In my case the water prices are extremely high and therefore I was looking for something that would use a small amount of water. A friend of mine used a counterflow chiller but that was not very economical in water usage. Another brewer in my neighborhood used the Therminator and after a great afternoon of testing it (and tasting his beer) I was convinced and bought one.

I like high quality stuff and I will always recommend buying the quality tools over the cheap tools because, in my experience, the cheap tools often fail after a short while. This is one of those tools that will save you so much time, mess, money and frustration. It is worth every penny and it also looks great. 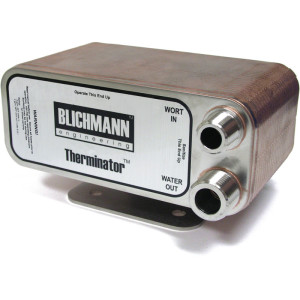 Buy the plate wort chiller from Blichmann Engineering called the Therminator wort chiller here for the best price and service.

The plate wort chiller from Blichmann Engineering, called the Therminator wort chiller, can chill 10 gallons in 5 minutes and has a very low water usage. This plate wort chiller is compact and easy to use but made for heavy duty. This is an all stainless steel wort chiller and that means that all the 316 plates and the fittings are really made from stainless steel. The Blichmann Therminator is identical to commercial grade brewery chillers and there are a lot of microbreweries that use this device. It is a tool that just looks, feels and performs professional.

How Does The Therminator Plate Wort Chiller Work?

Every home brew setup is different but you can watch this video to get a good idea on how to use your stainless wort chiller:

This wort chiller is ideal for gravity feed, is easy to clean and sanitize and small enough to boil!

The Therminator is not cheap, but it can be bought for just under 200 dollars right here at the High Gravity Shop, and I do recommend them because not only do they sell for a good price but they also provide you with the best service. As said it comes at a price but compared to other wort chillers you get good quality stuff like all the products from Blichmann Engineering. Can you name me another wort chiller that says and actually does chill 10 gallons in 5 minutes?

So buy the plate wort chiller from Blichmann Engineering called the Therminator wort chiller here for the best price and service.

What other people have to say about the Blichmann Therminator:

# Pete:
I wouldn’t brew without the Therminator. 15 gallons of boiling wort in 10 minutes cooled to pitch temperature.

# Michael:
I use a Blichmann and I love the cooling power. I recirculate the wort to drop the temperature of the batch to 140, and then straight into the fermenter. Much easier and faster than my old immersion chiller. I do use hop sacks to help keep the hop material out of the chiller.

# Steve
I have used Blichmann for about 15 brews now and I don’t use a pump, just using gravity. I just love it that it only takes one pass to drop the temperature down.